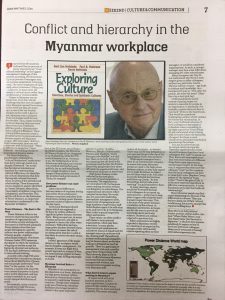 A survey from 68 countries indicated that 90 percent of senior executives see “cross-cultural leadership” as the biggest management challenge of this century, according The Economist. Up to 40 percent of managers sent on overseas assignments terminate early. The cost to employers of each early return is between US$250,000 – $1,250,000. In most cases, the reason is cultural issues rather than professional or technical skills.

Expats in Myanmar are not exceptions. Even the cultural challenge they face here is tougher, since Myanmar opened its economy to the world less than ten years ago, as one of the last frontier markets in the world. Like it or not, Myanmar was in isolation from the outside world for over five decades. Thus, expats working in the enchanting Myanmar have often found lots of setbacks – oddities, quirks, idiosyncrasies due to cultural differences. These cultural differences can create a dreadful barrier to communication between expats and Myanmar people, affecting expats’ ability to build connections, motivate and collaborate with local people. “What is different is dangerous”, Geert Hofstede – the leading scholar in intercultural theories states.

Dr. Geert Hofstede,a psychologist, published his “cultural dimensions” model more than forty years ago, based on a decade of research. The model has become an international standard for understanding cultural differences. He identifies six cultural dimensions that help distinguish cultures from each other, in terms of the attitudes and relationships. These dimensions can be measured, and are identified as: Power Distance, Masculinity, Uncertainty Avoidance, Long-term Orientation, and Restraint. This article will focus on the dimension of Power Distance, an important orientation to understand in the Myanmar workplace.

Power Distance – The East vs the West

Power Distance refers to the extent to which the less powerful members of organisations and institutions accepts and expects that power is distributed unequally. Power distance describes how people belonging to a specific culture view power relationships between people– superior/subordinate relations. The Power Distance Index (PDI) measures the degree to which the members of a group or society accept the hierarchy of power and authority. PDI has had a substantial influence in intercultural training.

For example, Asian countries normally have high PDI score, while lots of Western countries have a low PDI score. According to Hosftede’s Insights, the PDI score of China is 80 out of 100, Singapore is 74, Thailand 64, while the PDI score of America is 40, Germany at 35, The Netherlands at 38. In America an individual can criticise the president and his/her party publicly, but an individual would face a tough situation or even danger if they publicly criticised the president and government of China, for example.

How power distance can cause problems

Airbus and Boeing produced planes which are supposed to be flown by 2 pilots without a significant power distance between them. Being on equal-par, in terms of status and power, one pilot is supposed to correct the other when necessary. With pilots having a large power distance between them, the airline increases the risk of accidents given that the co-pilot is less likely to correct the more senior colleague.

Indeed, ignorance of the power distance in the workplace would lead to dreadful consequences – for example, Korean Air flight 801’s missed approach to Antonio B Won Pat International Airport in Guam on August 6 1997, killing 229 people on board.

Whether it’s at a monastery, in the classroom or at home, Myanmar is a high power distance culture. Myanmar is a hierarchical country as opposed to egalitarian Western countries. Though other religions make use of hierarchy, Myanmar Buddhism encourages people to submit to five most important entities in society: Buddha, Dhamma, Sangha (Community), Parents, and Teachers. “Don’t disrespect the Buddha” is a vital law. There is the body hierarchy too, meaning that the head is the purest part and the feet the dirtiest. Hence why people take their shoes off inside the pagoda and house, and never touch someone on their head.

High power distance is also reflected in the work place, especially in local companies or businesses. The organisations are centralised with the business owner making decisions without real delegation to subordinates. The organisational structures reflect complex hierarchies. We would also see autocratic leadership, paternalistic management style, many levels of management and large numbers of supervisory staff. Subordinates expect to be told what to do, and how to do it. In Myanmar, there is also a special respect for elders and seniors.

These values can often conflict with those in international organisations, which may have a structure. In some places, supervisors and employees are considered almost as equals and the manager may even converse with the cleaning staff. The authority at these multinational companies may be decentralised, so decision making is delegated as much as possible. There is a participative management style and a smaller proportion of supervisory staff. Thus hierarchy plays a role in many conflicts between Myanmar businesses hiring overseas managers and workers, and international companies working with Myanmar staff.

What does it mean to expats working in Myanmar?

If expats work with local business partners, or for a local organisation, it is good to acknowledge a leader’s status. Whatever you do, don’t push back explicitly. The owner normally makes all decisions – so beware. There may not be real delegation so you may need to go to the top of the organisation if you want answers.

When expat managers lead a team in an international company, be aware that many Myanmar people are used to the high power distance culture, so they may expect you to make decisions, or expect you tell them what to do. You need to provide detailed instructions, and follow-up closely. “Be less demanding, and provide more coaching” is a good mindset to have.

In many meetings, expats would feel frustrated because local colleagues do not speak up, raise opinions – preferring to keep quiet or agree with whatever their manager/supervisor says. This is because of the power distance orientation in the culture. At Myanmar universities, lecturers are also the ones to provide all knowledge about particular subjects. Students are seldom expected to question this.

Elders and seniors are highly regarded in Myanmar society. In a meeting in an organization, younger people infrequently express opposing ideas to their managers. It would be considered inappropriate. As such, a younger manager may face some difficulties managing her older subordinates.

Many foreigners say they do not understand why there is such respect given to elder colleagues, without any particular reason. There is indeed a reason – age links to wisdom and knowledge. As a local proverb puts it: “The older the person, the wiser his brain” (Shar bin o-lay a-hnit pyit-lay).

Understanding the social custom of paying respect to seniors is essential for people in an organisation in Myanmar. For example, a junior does not dare to “ask back” when in the boardroom. That would be considered challenging a senior, which violates the hierarchal relationship. In fact, a very habitual behavior of local colleagues in Myanmar is to hesitate when responding to an expat supervisor. Even if they do not understand what is being said, it would violate the hierarchy of respect for them to seek clarification and understanding by questioning the person.

It is not an issue that can be solved easily and quickly. Basically expats should create an environment that their local colleagues feel “safe” to speak out. They know and may experience that even their ideas are different from their expat supervisors, and areappreciated. In the long run, it requires that they have the ultimate “trust” on the expats so that the local colleagues can dare to raise their voice. Stephen Covey, author of The Speed of Trust, writes “Trust is the glue of life. It is the most essential ingredient in effective communication. It is the foundation principle that holds all relationships.”

Many Myanmar people may find expats interesting too, because of the differences in cultures. They may desire to break out of their cultural conditioning, but to even attempt this requires building trust.

Hana Bui is an intercultural trainer and best-selling author with the book “When Global Meets Local – How Expatriates Can Succeed in Myanmar”. It is the first-time popular guidebook for expats on how to work well with local colleagues. Hana can be contacted at hana@interculturemyanmar.com