The Four Distances model tells us about a variegated set of variables that affect communication and make it of excellent quality, satisfying, constructive, or bad, destructive and miserable.

It is good to start the more in-depth exposition of the model with an overall picture, and then move on to the analysis of each single point and each single “Distance”.

This is in summary the representation of a thought that dates back even to the famous “Essay on Human Intellect” by John Locke, a 17th century British philosopher and physician, pioneer of the studies on language and communication [1]. Locke, for example, distinguished:

Ideas of sensation, those that come from external experience, from sensations such as, for example, colors. The formation of these ideas takes place from external objects, from which data come that are imprinted on that blank slate that is our sensitivity.
Ideas of reflection concern the internal experience or reflection on the internal acts of our mind such as thinking, the birth of ideas, doubting, wanting, etc.
The overall model can be represented as follows:

In this model, the distinction between Hard and Soft variables does not have to do with common perception (Hard = solid, concrete, and Soft = light or less important), but with the very nature of a variable. Both hard and soft variables are absolutely important.

The difference lies in their greater or lesser tangibility. Values ​​are something intangible, but the resulting behaviors are very tangible – for example, the abstract value of ecology gives rise to the concrete behavior of recycling paper, plastic and glass, among other things, and not polluting, so don’t we confuse the fact of being intangible with an alleged minor importance of a variable.

In fact, at a certain moment, I can communicate with someone and find myself – as Transactional Analysis shows, in a state of Parental personality, or Adult State, or Child State, with various sub-categories and nuances. This will affect how I communicate, on every front, what I say, how I say it, what distances I place with the person I’m interacting with, and what attitudes I use.

In the Science of Neuro-Associative Programming ™ (PNA) [2] the phenomenon of the connection between a mental state (let’s say relaxation, or the activation of positive emotions) with an external state or performance, such as communicating in public, is concretely realized , intercultural communication, negotiation, sales, training or sports performance.

The essential thing is to understand in which mental state the greatest well-being for the person and the best performance for her are produced at the same time.

In intercultural communication, returning to the Fischer scale, certainly better results are produced by associating relaxation and sensitivity to the communicative act, while at the same time avoiding the onset of anxiety or altered negative states of consciousness.

This also applies to doctor-patient communication and any professional communication, including helping relationships such as coaching, counseling, psychotherapy and training.

The keywords of this article on Neuro-Associative Programming and Intercultural Communication are:

If you were born with wings, I don’t see why you should crawl

if you were born with wings, I don’t see why you shouldn’t try to use them

if you are not born with wings, but you really want them, they will grow

until you don’t even notice you’re using them.

and you will fly high in the sky, free.

This climb also applies to emotional and empathic listening skills. The different statuses can be extended to the field of training, Coaching or counselling. Let’s see their nature:

Picture 3 – Schematic visualisation of the Staircase of Competences 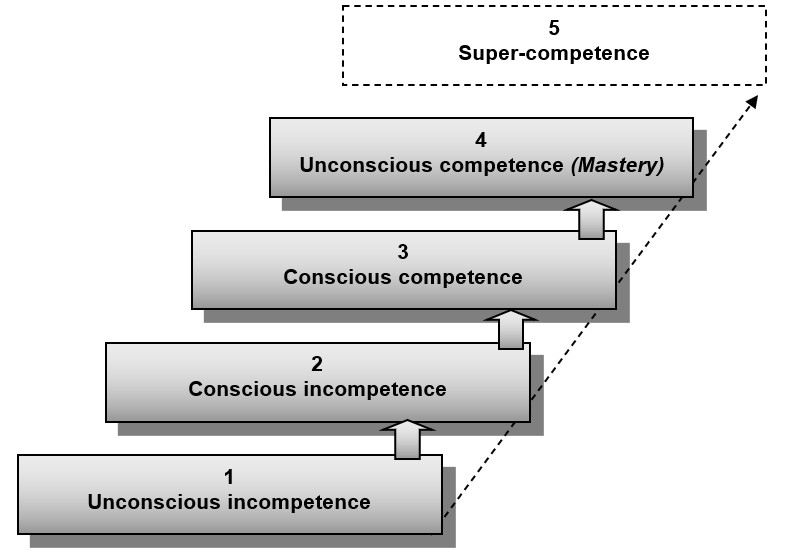 Howell’s model was originally designed to study a ranking of states of intercultural empathy. Howell intended to study the different levels of a person’s ability to adapt them to a different cultural context (overcoming the difficulties that come with settling in a non-native country): when can I move well and smoothly within a culture, having incorporated and understood it completely?

This question was the starting point, but the model was then taken up by many as a general scheme of learning degrees in every field, sport, management, education.

William Howell and Stella Ting-Toomey also subsequently introduced a fifth category, Unconscious Super-Competence, to highlight those who, in a process of adaptation, manage to develop skills that are clearly above average, exceptional, above the limit.

The validity of this scale is wide; it concerns all kinds of learning in life. It helps us to ask where we are, or where we have stopped, and, above all, invites us to reflect on the fact that there is room for improvement everywhere and at all times. Also in learning to manage our emotions and develop empathy.

© Article translated from the book “Ascolto attivo ed empatia. I segreti di una comunicazione efficace“. copyright Dr. Daniele Trevisani Intercultural Negotiation Training and Coaching, published with the author’s permission. The Book’s rights are on sale and are available. If you are interested in publishing the book in any language, or seek Intercultural Negotiation Training, Coaching, Mentoring and Consulting, please feel free to contact Dr. Daniele Trevisani.

In psychology, the four stages of competence, or the “conscious competence” learning model, relates to the psychological states involved in the process of progressing from incompetence to competence in a skill.

Management trainer Martin M. Broadwell described the model as “the four levels of teaching” in February 1969.[1] Paul R. Curtiss and Phillip W. Warren mentioned the model in their 1973 book The Dynamics of Life Skills Coaching.[2] The model was used at Gordon Training International by its employee Noel Burch in the 1970s; there it was called the “four stages for learning any new skill”.[3] Later the model was frequently attributed to Abraham Maslow, incorrectly since the model does not appear in his major works.[4]

Several elements, including helping someone “know what they don’t know” or recognize a blind spot, can be compared to some elements of a Johari window, although Johari deals with self-awareness, while the four stages of competence deals with learning stages. 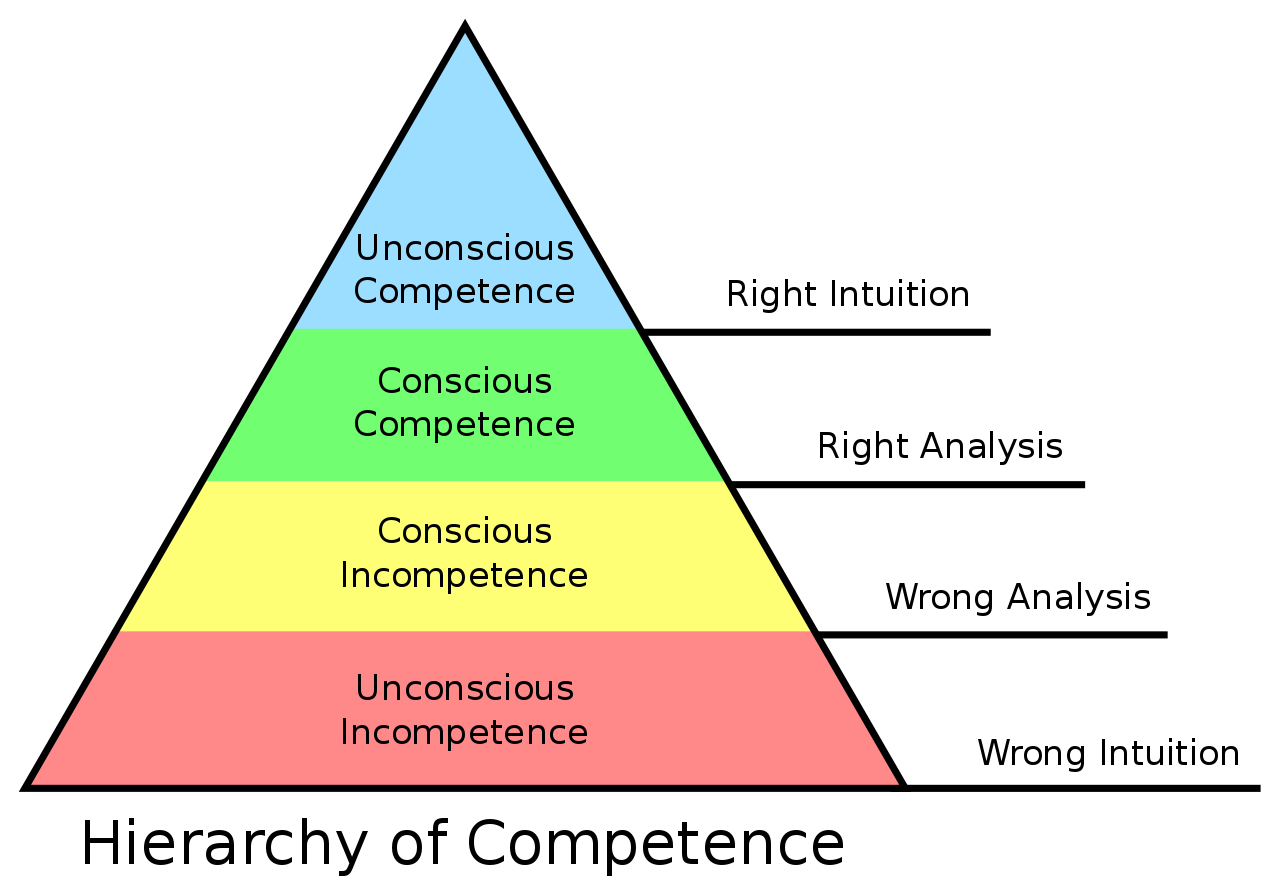 The four stages are:

A few examples among many peer-reviewed articles that mention the four stages: